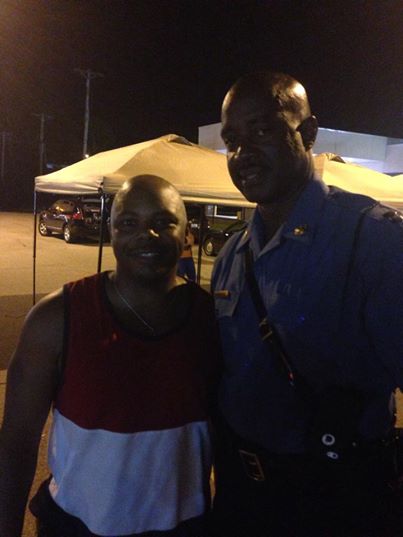 Upon returning to my hometown of St. Louis, Missouri on August 20, 2014 to give back to my community and to support outstanding leaders like Capt. Ron Johnson, I experienced mixed emotions. On one hand, I felt proud, grateful and excited about being in a position to provide psycho-education to mourning individuals. On the other hand, I felt troubled, worried and disheartened.

On 21 August 2014, I spent three hours educating a group of individuals about healthy mourning, anger management and conflict resolution. As we dialogued about why we mourn Michael Brown and the away ahead, my pride, gratefulness and excitement begin to dwindle. As I attempted to educate individuals about some of the psychological challenges experienced by African Americans throughout history, I was filled with a spirit of concern. During our conversation, I realized that a larger percentage of attendees were truly in need of psycho-education, direction and guidance. Individuals expressed a great deal of compassionate and felt good about experiencing unity as a people, but many expressed that they did not have proper coping skills and could benefit from receiving guidance regarding how to communicate their grief, compassionate, anger and overall emotional synergy in a healthy, progressive and productive manner.

At the conclusion of my psycho-educational event, I decided to head to Ferguson to support individuals on the front-line. As I walked a mile and a half down West Florissant, my emotional ambivalence intensified. I saw hundreds of police, a few armored vehicles and protestors talking in small groups. As I approached one of the groups, Capt. Ron Johnson was standing in the center. He was politely answering questions from media reporters who attempted to put a negative spin on comments he made about the crisis at hand.

Despite receiving emotionally arousing and provocative questions from media, Capt. Johnson remained calm and responded without apparent anger or distress. As I observed his demeanor, I felt proud and excited about being a Black man. After Capt. Johnson finished speaking, he thanked reporters for their time and departed the small group. As he walked away, the reporters turned their cameras toward another African American male who was very emotional, dramatic and loud. The young man began to rant and rave about injustice.

As I listened to the young man, Capt. Johnson approached me and said, “Brother, this is the challenge that we are facing on the front-line. Cameras are everywhere and emotions are high. Everyone should be afforded an opportunity to speak and should definitely exercise their freedom of speech; however one’s demeanor and delivery is vital to being heard. Without calmness, the struggle continues. This is why I stand guard.”  I thanked Capt. Johnson for his leadership and replied, “People like you and I must provide leadership and guidance because the nation is witnessing a perfect storm: Emotionally aroused, compassionate and angry people who have access to media reporters who are willing to interview anyone who will speak despite their emotional disposition, demeanor or delivery. This is a recipe for disaster. We need you on the front-line. Thank you for being a voice that can be heard.”

Before we could finish our conversation, media reporters re-engaged Capt. Johnson and I walked off. In reflecting on my brief conversation with Capt. Johnson, I felt refreshed, yet troubled. Refreshed because I walked away knowing that we have calm and rational leaders on the front-line. Troubled because I felt sad for the foot soldiers who need and deserve to be heard. My sadness nearly brought me to tears because I know that their messages will be misunderstood, downplayed and even criticized because mainstream society will focus on their demeanor and delivery instead of their pain and suffering.

The emotional ambivalence that I am experiencing as I write this article is a result of being in St. Louis for just one day. Image how you would feel and express yourself if you witnessed the drama from day one (August 9, 2014)? As a psychotherapist and motivational speaker, I understand that proper delivery is crucial to being heard; unfortunately everyone does not have “excellent” communication skills. With this in mind, I plead with you to withhold the judgment and to not get caught up with the media hype. Matthew 7 instructs us to not to judge others or we too will be judged. For the same way we judge others, we will be judged, and with the same measure we use.

My challenge to mainstream society is to demonstrate empathy, to listen with a compassionate heart and to strive to instill hope in people who have and continue to mourn. Hope provides a means and desire to move forward. A person, who lacks hope, lacks the desire to progress and/or live. It is time to turn anger into awareness; marching into movements, protesting into polling, looting into love and rioting into righteousness. I have been told that actions speak louder than words. So, I am asking you to lead with action. This is my charge and I challenge you to join Capt Ron Johnson and me as we lead the charge on the front-line (among the people).

If you know of anyone who is in need of support, please have them contact me atdwayne@realhorizonsld.com or 240-242-4087.