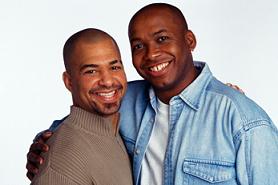 Have I been married to my husband for two years, but I am struggling because I do not know if I should remain in the marriage. We have a daughter and I love my husband, but we argue and fight a lot. He has called me a bitch and I have called him names as well. We really did not know each before we moved in together and got married. It might sound crazy, but I have learned to live with the arguing, but I am having a really difficult time living with the fact that I believe that my husband might be bi-sexual.

When we first met he had one gay friend who he allowed to come to his house. I was not sure what to think because he told me that he himself was not gay, but enjoyed being around his gay friend because they worked together. I did not make a fuse because I trusted him, plus I do not have anything against gay women or men. People can date whomever they like, however that lifestyle is not for me.

As time passed, I begin to worry more because he romances his gay friend just like he romances me. He cooks for him, goes out to eat and they spent a lot of time hanging out. They frequent straight clubs on a regular basis, but will occasionally hit up a gay club. I have confronted my husband on numerous occasions and he states that he hits up the gay club occassionally because he has a good time and his gay friend does not mind hitting up straight clubs. Now, I want to believe husband when he says that he is not gay or bi-sexual, but I am going crazy because his behavior says otherwise. I caught him lying in the bed fully clothed with gay friend watching football. What two grown men lay in the bed together? I feel like he is playing me for a fool and I am so confused. I love my husband and our daughter and had hopes of spending the rest of my life with him, but I do not want to be in a marriage with a bi-sexual man. I need to figure out the truth about my husband before I lose my mind.

How Can I tell if my Husband is Straight or Bi-sexual?

Confused and In Love,

Dear Confused and In Love,

I will start off by stating that I am not an expert in identifying gay or bi-sexual women or men. The information that I will share is based on my personal observations and conversations with straight men and limited therapy experience with bi-sexual men.

My Personal Observations and Conversations with Straight Men

I have personally observed that men who are straight and are not homophobic typically do not have a problem with conversing with gay men. However, a large percentage of straight men chose not to hang out with gay men, especially in public places. This behavior is primarily related to their fear of being judged or characterized as being gay. Some people would argue that a confident man does not worry about what others think. This is partially true. Perception is reality for many. So to avoid inaccurate perceptions from surfacing many straight men avoid putting themselves in certain situations. I have heard some straight men say that they do not have much in common with gay men in regards to their social circles. Also, I have heard straight men express that hanging out in gay clubs would cause them to experience a great deal of anxiety mainly because they would feel out of place and uncomfortable.

Here are my thoughts based on my personal observations and conversations with straight men:

Thought #1 – Straight men romance women only.
Thought #2 – Straight men acknowledge through their words and actions only being sexually attracted to women.
Thought #3 – Straight men will converse with gay men, but typically do not feel comfortable hanging out with them, especially in gay establishments.

My Limited Working Experience with Bi-sexual Men In Therapy

Here are my thoughts based on my limited therapy experience with Bi-sexual men:

As stated in the beginning, I am not an expert on identifying bi-sexual men. Therefore, I highly recommend that you speak with a therapist who specializes in this area. Also, to gain additional insight about your husband’s sexual orientation, I highly recommend that you read, Is My Husband Gay, Straight, or Bi? A Guide for Women Concerned About Their Men by Dr. Joe Kort.

Please seek professional guidance so that you can work through your confession and gain insight about how to move forward in your marriage. Also, be mindful that your husband’s behavior is not a reflection of you. His issues are his. Ask him to attend therapy with you so that he can discuss his sexual orientation, gain a better understanding of himself and learn how his actions are threatening your marriage.
Best regards,
Dr. Buckingham

If you have questions for Dr. Dwayne Buckingham regarding relationships (married, single, etc), parenting, or personal growth and development, please click here and receive a response within 72 hours.

Disclaimer: The ideas, opinions and recommendations contained in this post are not intended as a substitute for seeking professional counseling or guidance. Any concerns or questions that you have about relationships or any other source of potential distress should be discussed with a professional, in person. The author is not liable or responsible for any personal or relational distress, loss or damage allegedly arising from any information or recommendations in this post.