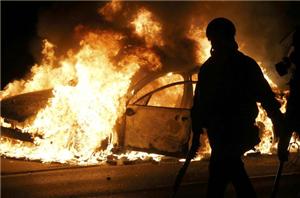 To understand why Ferguson is on Fire, you do not need a Ph.D. However, you do need to reflect and to allow your heart to guide your thoughts, words and actions. Given that we live in a democracy, every man and woman is entitled to express his or her opinion and I am simply sharing mine as a Black male.

As a native of St. Louis, Missouri and a compassionate psychotherapist, I wrote this article as a plea for reflection and action. I was born and raised in St. Louis and by the grace of God I survived racism, violence and poverty. As you read my thoughts, I ask that you do so with a non-judgmental and empathic heart.

In light of the recent verdict that took place on Monday, November 24, 2014 regarding the criminal case against police officer Darren Wilson, millions of Americans are confused, sadden, angered and in shock. Unfortunately, this emotional distress has once again led to rioting and people are struggling to understand why Ferguson is on Fire.

Whenever people do not understand something or desire answers they search for explanations and/or reasons. They turn to the media, politicians and activists so that they can better understand how to cope and move forward. With this in mind, I decided to provide insight as to why Ferguson is on Fire from a psychotherapist’s perspective.

Here are my three reasons:

1. Michael Brown is Dead and Some People Lack Empathy

First and foremost, Ferguson is on Fire because a life was taken. Although people are focusing on and debating over politics and injustice, the true underlying issue is the perception and value that is associated with life, especially a Black male’s life. No matter what happens from this point on, Michael Brown is not coming back and a man took his life. This is the real issue. The pain and suffering associated with loss and death leads to and causes cognitive and emotional dissonance.

Thousands of individuals do not know how to cope with unresolved and suppressed anger that is associated with a history of real and/or perceived injustice. Anger is an emotion or mind-set that typically causes individuals to strike out when they feel that someone has treated them unfairly or unjustly. Anger often intensifies when individuals are frustrated, hurt, disappointed or threatened. The unfortunate death of Michael Brown caused this powerful emotion to manifest in many people. It is important to remember that unmanaged anger is unhealthy and those who feel angered over an extended period of time typically lose their ability to think clearly and act rationally. Anger mixed with pain is a bad combination. When expressed in a negative manner, these emotions can and will hurt others. Michael Brown is dead and people are angry. Anger is part of the grieving process and is one of the most poorly managed emotions in society today. This is why Ferguson is on Fire.

Likewise, Ferguson is on Fire because some people do not care that Michael Brown is dead. America is experiencing an empathy deficit. There is blatant lack of empathy for Michael Brown’s parents and family as well as for most Black males living in America. Whether you are Black or White – Purple or Green, to demonstrate and express lack of empathy is disrespectful and inhumane. Empathy is about walking in others’ shoes and attempting to connect with them in a manner in which they feel understood and emotionally safe. Empathy is not about agreeing, but it is about expressing compassion. Take a step back and stop debating politics and ask yourself how would you feel if you loss your son or daughter to homicide. Most people turn to the legal system for justice so that they can be treated fairly, but empathy is associated with feeling valued and comes from people.

The inability to cope with built-up anger and the lack of empathy is the first reason why Ferguson is on Fire.

2. The Grand Jury’s Verdict Was Unjust

According to Darren Wilson, he did his job. No one disagrees that he did his job. The issue is how he did his job. Police officers are charged with protecting and serving citizens, not punishing and executing them.  I believe that most people would agree that Michael Brown’s behavior towards an authority figure was inappropriate. However, millions of individuals are having a hard time believing that some people agree that Darren Wilson was justified in taking his life. The verdict was unjust because it was not morally right or fair. Like other Black males, I am concerned about living in a society where people believe that homicide is okay if triggered by hostility and physical confrontation.  The Grand jury’s decision only addressed the criminal issue, not the civil issue. They failed in this endeavor and as a result one young man was sent to the graveyard and the other one was sent home. This is the second reason why Ferguson is on Fire.

On November 24, 2014, America’s unjust judicial system revealed to the world that Black males’ lives are meaningless. We received confirmation once again. The verdict confirmed that any Black male who lives in America is as safe and secure as a kitten that is placed in a locked cage with a killer pit bull.

Throughout history Black males have lived with the disturbing assumption that our lives are insignificant and dispensable. Why? On August 28, 1955 Emmitt Till, a 14-year-old black boy was murdered for whistling at a white woman. The two white men who murdered him were set free. Although, 59 years have passed by, things are still the same. On August 9, 2014, Michael Brown, an 18-year-old black boy was murdered for reportedly disrespecting and getting into a physical confrontation with a police officer. The white man who murdered him was set free.

To understand why Ferguson is on Fire, you must understand Black males’ plight in America. Thousands of Black parents are struggling with the fact that they have to tell their sons the following:

“Your life is important and meaningful to us, but in America you will be treated,  judged and prosecuted based on your skin color, not your character or your birth right as a child of God.”

This is the conversation that millions of parents must have with Black males.

The sadness and concern that I am experiencing as I write this article is because millions of people who reside in this great country do not believe that my life is valuable. With this in mind, I plead with you to take some time to reflect before you speak about Black males or Black people in general. Reflect on a difficult situation you experienced in life and think about how you behaved when you felt wronged and/or devalued. Withhold judgment and do not get caught up in the media hype. Matthew 7 instructs us to not to judge others or we too will be judged. For the same way we judge others, we will be judged, and with the same measure we use.

The manner in which I currently view the importance of my life and that of other Black males has been passed down from generation to generation. Thoughts of being insignificant are so deeply rooted in our minds that it invades the very fabric of our souls. This is the third reason why Ferguson is on Fire.

If we all desire for Ferguson to stop burning, we must first come together and have honest and transparent dialogue about the on-going and historical injustice that continues to plaque the Black community. Second, we must encourage Black males to seek psychological help and instill hope in them so that they have the desire to move forward in life with a sense of value. Third, we must address the empathy deficit in America. Finally, we must take action and not just pray and talk about our plight. If you are not taking positive and progressive action, you are not helping. Ferguson is on Fire, but it does not have to be.

If you know of anyone who is in need of support and life coaching, please have them contact me at dwayne@realhorizonsld.com or 240-242-4087.

Click here to purchase your copy of A Black Man’s Worth DVD and book now.